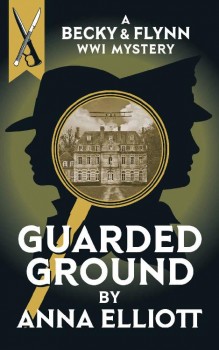 Two favorite characters, Two hearts to guard. One deadly traitor to unmask.
The Western Front, 1915. It’s been twenty years since Becky and Flynn first met, in the adventures recorded in the Sherlock and Lucy Mystery Series. Now they’re fighting for England in the Great War. But they still have an incomparable ally in the great detective himself.

Becky is now a surgeon at a French field hospital near the western front. When a badly wounded man gazes up at her from his stretcher, Becky’s heart races as she recognizes her former partner in investigation. Flynn is now a major, and barely conscious, but he’s just as gritty and stubborn as he was when Becky knew him as one of Mr. Holmes’s Irregulars. Becky must save him and then protect his wounds as he recovers. With Flynn, of course, quiet convalescence is not in the program. Especially when Mr. Holmes appears to ask for their help catching a German spy, and the bombs begin to drop.

A fast-paced and thrilling Sherlockian spin-off, with unexpected twists and turns, two strong and memorable heroes, and a touch of romance. On Guarded Ground stays faithful to the spirit of the beloved original series, while introducing more intriguing relationship dynamics.