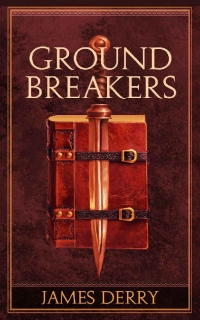 James Derry has been writing or drawing stories since the day his parents let him borrow a ballpoint pen. That’s when he created his first magnum opus in blue ink: a comic-book parody of Ghostbusters called ‘Roastbusters.’ Hey, he was ten.

#1 – Myths of the Fallen City
The land of Embhra is ruled by magic—and it’s ruining everything.
Gods and sorcerers jealously hoard their power, and innocent people everywhere are suffering for the cause of those who wield magic. Sygne and Jamal are hoping they can change that. She’s a scientist. He’s a former soldier and aspiring poet-singer.
With her brains and his bravado, they might just make a difference. It also helps that they are on course to find a primordial Ancient One that might hold the key to changing the entire world. Not so helpful: both a war goddess and a love goddess want to see them dead!

#2 – Relics of the Desert Tomb
Sygne and Jamal are together again—and on the run from a team of monstrous assassins! Unfortunately for them, they are running toward something that might be even more dangerous. In the shifting sands of Embhra’s largest desert, they’ll fight to survive against an ancient evil that can reanimate the dead and bend the very fabric of space and time!
Meanwhile Jamal faces a heartbreak from his past, and Sygne the scientist faces off against a divine enemy. Can the ‘Mother of Invention’ outsmart the Mother of All Ticked-Off Goddesses?

#3 – Blades of the Demigod King
It’s the thrilling conclusion of the Groundbreakers’ first epic adventure!
Sygne and Jamal have reached the utopian garden city of Albatherra, but things are not as perfect as they seem. Soon, shocking secrets from Sygne’s past are revealed, and a world-shattering power is unleashed. Only one thing is guaranteed: Sygne and Jamal will survive in one piece—and that is not nearly as comforting as it sounds!