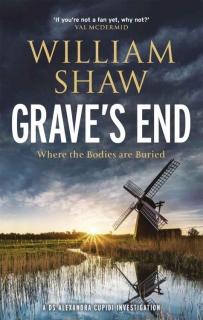 A BIZARRE DISCOVERY
An unidentified cadaver is found in a freezer in an unoccupied luxury house. No-one seems to know or care who it is or who placed it there. When DS Alexandra Cupidi is handed the case, she can have no idea it will lead her to a series of murderous cover-ups and buried secrets. Namely the discovery of the skeleton of public-school boy, Trevor Grey, beneath a housing development.

A HISTORIC CRIME
His disappearance twenty five years earlier had almost passed unnoticed. But as evidence surfaces that his fate was linked to long suppressed rumours of sexual abuse, Cupidi, her teenage daughter Zoe and her friend Bill South find themselves up against powerful forces who will try to silence them.

A BURIED LIFE
Digging deep into the secrets that are held underground leads to Cupidi’s realisation that crime and power are seldom far apart. There are dangerous connections between the two cases, which are complicated by Constable Jill Ferriter’s dating habits, a secret liaison and the underground life of Trevor Grey’s only friend.
The most riveting and atmospheric DS Alexandra Cupidi novel so far, Grave’s End confronts the crisis in housing, environmental politics, the protection given to badgers by the law. With meticulously mastered characters and a brooding setting, this third book in the series confirms William Shaw as one of the finest crime writers.