Good as Dead by Susan Walter 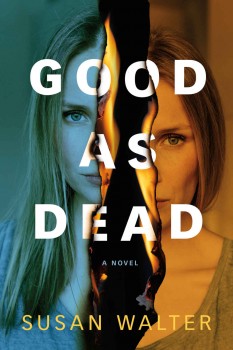 It all starts with a promise from a stranger: We’ll take care of everything.
Holly Kendrick’s husband is dead. Holly saw it all. In one violent moment, a hit-and-run accident turns Holly’s life upside down. Then a fixer for the high-powered guilty party approaches Holly with an offer she is in no position to refuse. Holly and her daughter, Savannah, will want for nothing, beginning with a luxury dream house—all for the price of their silence. But when their sudden appearance in privileged Calabasas, California, piques the curiosity of neighbors, the price becomes greater than they imagined. Because Holly and Savannah aren’t the only ones in the neighborhood with something to hide.

Told from alternating points of view, Good as Dead draws together an unlikely group of people bound to one another by a crime, a cover-up, and compounding deceptions. As carefully constructed lives begin to crumble, how far will everyone be willing to go to bury the truth and protect the people they love?