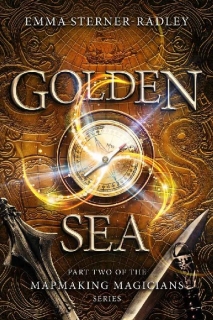 Our four mapmaking magicians are back at the Hall of Explorers. As they continue their studies, their journey to find new lands is brought forward following a calamitous event. However, seafaring and exploring turns out to be even more dangerous and complicated than they expected.

Soon they have to battle not only the perilous waves, the king’s cruel plans, and sea monsters, but also their emotions. Eleksander pines for Hale, who in turn joins Sabina in having feelings for Avelynne. Meanwhile, Avelynne is realising her lack of romantic interest may run deeper than she thought. Meeting new people on their journey makes things even more complex.

Feelings will however have to take the backseat as they realise that the magical conspiracy they are part of is even bigger than they thought and that the ocean is full of surprises; some wonderful, but far too many of them dangerous beyond measure. And like the king of Cavarra, the sea doesn’t show mercy.