Girl, Under Oath by John Ellsworth 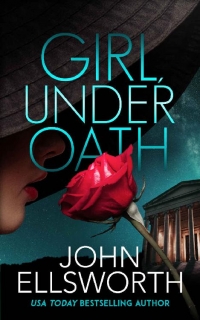 Taking the case could free an innocent woman… or a guilty one.
Doctor Jenny Ipswich’s perfect life crashes down the day her husband dies. It shatters when his dying request is to pay half of his two-million-dollar life-insurance policy to some woman named Elise.

Shocked to learn the secret affair resulted in a second wife and a child in Paris, Jenny comes face-to-face with the other woman when Elise shows up demanding half of everything she’s worked hard for—over Jenny’s dead body. As the wives square off, Jenny stands trial for their husband’s suspicious death.
Criminal attorney Michael Gresham, is on the case, but when Elise suddenly vanishes, disturbing texts, emails, and a horrifying discovery come to light. When dangerous attraction and sudden obsession collide, Michael must entrap a killer to protect those he loves from a case that’s turned personal.