Girl in the Dark by Nicole Adrianne 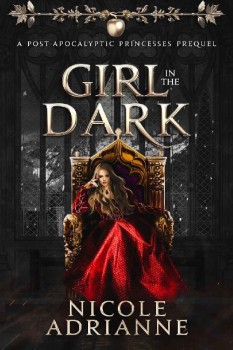 Evil stepmothers aren’t born—they’re made.
After a devastating plague nearly destroyed humanity, Vespera never expected to leave the safety of her rural homestead. But the ruling royals chose her to help repopulate the kingdom’s capital city, and a single peasant girl can’t defy a power-hungry new government without a death wish.

Things go from bad to worse when, instead of rewarding her loyalty as promised, the city officials doom her to a life of servitude and labor in the lowest class of society. When blind obedience to her rulers leaves her unemployed, homeless, and estranged from her family, Vespera’s attempt to change her fate and avenge the peaceful life she lost leads to even more trouble.
Because in a city swarming with nobles, soldiers, and rebels, revenge will come at a desperate cost…