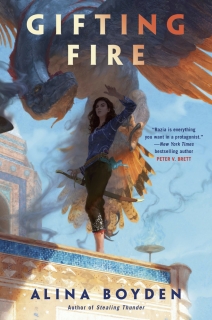 The battle has been won, but the war is just beginning.
Although at long last Razia Khan has found peace with herself and love with her prince, Arjun, her trials are far from over. In order to save her prince and his city from certain destruction, Razia made a deal with the devil–her father, the Sultan of Nizam. Now the bill has come due.

Razia must secure the province of Zindh, a land surrounded by enemies, and loyal to a rebel queen who has survived her father’s purge. But when her old tormentor Prince Karim invades her new home and forces her into a marriage alliance, Razia finds herself trapped in the women’s quarters of a foreign palace, with her beloved Prince Arjun exiled from her side.
Now, in order to free herself, and her province, from Karim’s clutches, she must call upon all of her training as a royal princess, a cunning courtesan, and a daring thief to summon new allies and old friends for a battle that will decide her fate, and the fate of an empire.