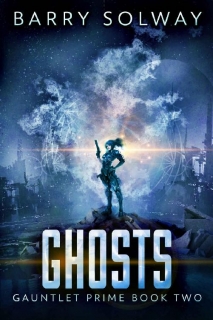 The only way to survive is to become a ghost
Freedom comes at a steep price. Escaping from the alien scientist had led to the death of four of their friends, leaving Mel and the rest of the survivors drifting in an alien culture, with no resources and no way to get home. Letting down their guard for only a moment led the Order to them, and they were back on the run. Crash landing on an alien world, they barely escape. After finding friends, both old and new, they are faced with a stark choice. Live the rest of their lives as fugitives in hiding in an alien world.

Or do the one thing they swore never to do—rejoin the deadly gauntlets to earn the money they needed to get home. As strange visions engulf Mel, she must make more and more desperate decisions. Friendship, trust and their very humanity are put on the line. Is she willing to risk everything to save her friends?