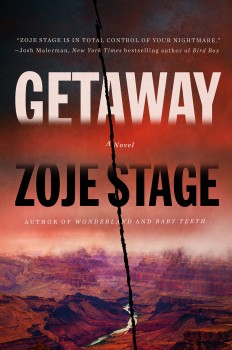 In this terrifying novel from the bestselling “master of the psychological thriller” and author of Baby Teeth (Entertainment Weekly), three friends set off on a hike into the Grand Canyon-only to discover it’s not so easy to leave the world behind.

It was supposed to be the perfect week away . . .

Imogen and Beck, two sisters who couldn’t be more different, have been friends with Tilda since high school. Once inseparable, over two decades the women have grown apart. But after Imogen survives a traumatic attack, Beck suggests they all reunite to hike deep into the Grand Canyon’s backcountry. A week away, secluded in nature . . . surely it’s just what they need.

But as the terrain grows tougher, tensions from their shared past bubble up. And when supplies begin to disappear, it becomes clear secrets aren’t the only thing they’re being stalked by. As friendship and survival collide with an unspeakable evil, Getaway becomes another riveting thriller from a growing master of suspense and a “literary horror writer on the rise” (BookPage).