Gauges in Time by Micheal Maxwell 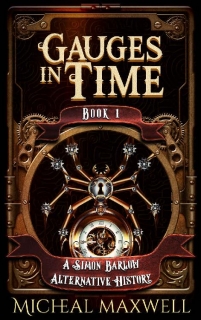 Lincoln has been hanged, The South has won the Civil War, Slavery is flourishing, and Evangeline Latimer wants things to change!
But, when the daughter of the Governor of the new Province of Oklahoma meets the handsome agent from the North, Simon Barlow, the seeds of revolution are born.

In a time of ever-growing technology, automatons, and new forms of transportation, a young woman finds her natural talent for building machines large and small. From automated arachnids to ape-like guardians, Evangeline has a mind for all things mechanical

Simon brings his commitment to overturning Latimer’s dark regime, warrior’s heart, and network of allies ready, willing, and able to overturn the results of the not-so civil war.
Freeing the slaves and making right the wrong of Governor Latimer and his henchmen’s evils will require brains, bravery, and an unyielding commitment to the rights of all people.