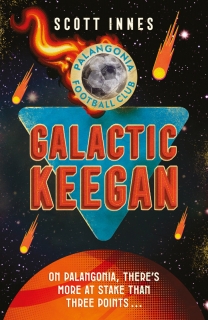 The near future. Earth has been invaded by an aggressive, imperialistic alien race known as the L’zuhl, who have laid waste to the galaxy for centuries.

Those humans lucky enough to have survived have been evacuated to the most distant reaches of space to rebuild and fight back against the L’zuhl onslaught. On the distant planet of Palangonia, in a large walled compound that houses the new human colony, there lives the former Newcastle United and England manager Kevin Keegan, the manager of Palangonia FC.

As the war rages, Keegan just wants to focus on the most important things – picking up three points on Saturday – but constantly finds himself sucked into the battle against the L’zuhl, whether he likes it or not. And now, with whispers of a L’zuhl spy on the loose in the compound, it falls to Keegan himself to find the culprit before it’s too late…