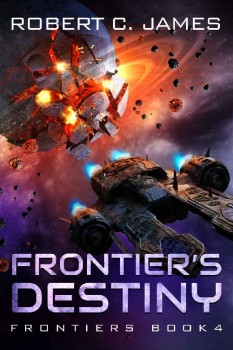 All the galaxy’s a stage as two forces collide…
Over a year ago, Captain Nicolas Marquez and Tyler Cassidy sent a transmission home, hundreds of light years from Earth. How did they survive the destruction of the Seeker Weapon Ship?
Jason Cassidy and the crew of the Cargo Ship Argo haven’t rested in their search for the two men. As they close in on the Horizon Cluster to rescue them, two questions become clear.

What will they find when they get there? And how will it reignite an ancient war six million years in the making?
If you enjoy gritty space opera and tales of intrigue in the vein of Firefly and The Expanse, you’ll love Frontier’s Destiny–the fourth book in Robert C. James’ Frontiers series.

Buy Frontier’s Destiny today to continue the adventures of the Argo’s crew as they go beyond the Reach and discover the galaxy isn’t quite what they imagined…
*Frontier’s Destiny was originally published as three serialized novellas. Those who read the original work will not need to read this edition – but fans will be sure to appreciate the story in the larger form it was initially intended.