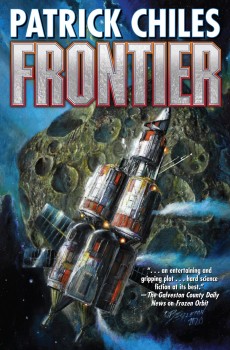 Marshall Hunter only wanted to fly: the faster, the higher, the better. But a life of rescuing wayward spacefarers and derelict satellites in the cislunar cruiser U.S.S. Borman is far from the adventure he’d imagined. But his fortunes change when a billionaire couple goes missing on their way to a near-Earth asteroid.

Out of contact and on a course that will eventually send them crashing into Mars, the nuclear-powered Borman is dispatched on an audacious, high-speed interplanetary run to bring the couple home. As they approach the asteroid, however, the Borman itself becomes hopelessly disabled.

With the Borman suddenly out of commission and far beyond reach, cislunar space begins falling into chaos as critical satellites fail and valuable lunar mineral shipments begin disappearing in transit. Nothing is as it seems, and Marshall Hunter and the rest of the crew suspect none of it is by coincidence.