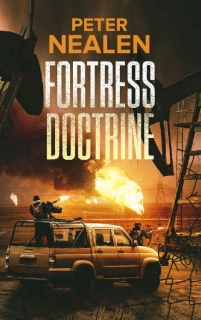 The U.S. teeters on the precipice…
…Chaos reigns, as enemies foreign and domestic circle like sharks.
Can any part of the Republic be saved?
Hank and his section have been reconstituted in the aftermath of the coastal fighting that has seen many—though not all—of the Chinese invaders beaten back. The plot to control the West Coast ports and a good deal of the infrastructure has failed.
But the lights are still off.
And desperation is spreading like wildfire.

America—what remains of it—has been hurt. Badly. And the Triarii are at the forefront of the efforts to try to stabilize the situation. Because the US will need some kind of stability before the external enemies that have nearly brought it to its knees can be confronted.
Fortress Doctrine is in effect.
But the Triarii are spread as thin as their allies. Hank will have to adapt quickly to a new form of warfare.
And outmaneuver enemies he doesn’t even know exist yet…