For Any Other Truth by Denzil Meyrick 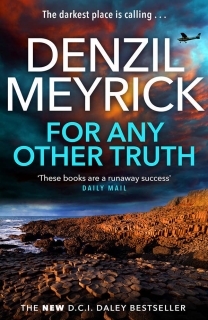 When a light aircraft crash-lands at Machrie airport, DCI Jim Daley and his colleague Brian Scott rush to the scene. But it soon becomes clear that both occupants of the plane were dead before take-off …

Meanwhile in Kinloch, local fisherman Hamish is unwittingly dragged into danger when he witnesses something he shouldn’t, and hotel manager Annie is beginning to suspect her new boss may not be as he first appeared.
And just as Chief Superintendent Carrie Symington thinks she has finally escaped the sins of her past, she finds herself caught in an even deadlier trap.

As the action spills across the sea to County Antrim – all under the scrutiny of the Security Service – the search is on for any other truth.