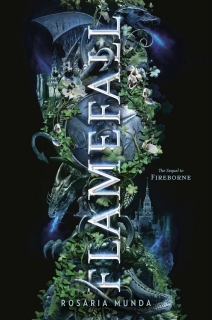 After fleeing the revolution and settling into the craggy cliffs of New Pythos, the dragonlords are eager to punish their usurpers and reclaim their city. Their first order of business was destroying the Callipolan food supply. Now they’re coming for the dragonriders.
Annie is Callipolis’s new Firstrider, charged with leading the war against New Pythos. But with unrest at home, enforcing the government’s rationing program risks turning her into public enemy number one.
Lee struggles to find his place after killing kin for a leader who betrayed him. He can support Annie and the other Guardians . . . or join the rebels who look to topple the new regime.

Griff, a lowborn dragonrider who serves New Pythos, knows he has no future. And now that Julia Stormscourge is no longer there to protect him, he is called on to sacrifice everything for the lords that oppress his people–or to forge a new path with the Callipolan Firstrider seeking his help.
With famine tearing Callipolis apart and the Pythians determined to take back what they lost, it will be up to Annie, Lee, and Griff to decide who–and what–to fight for.