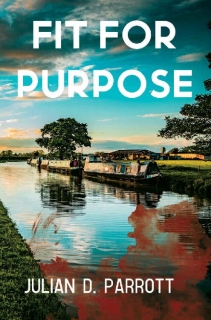 Former soldier, Tom, and skilled actress, Nia, are forty-somethings, both emotionally bruised by their differing life experiences. They don’t realise how lost and lonely they are until they accidently meet in a first-class cabin of a transatlantic flight and are immediately and irresistibly drawn to the other.

They embark on a relationship, bouncing between Nia’s bohemian life in London and Tom’s tranquil existence on a narrowboat traversing the stunning Llangollen canal.

Their love burns with a depth and intensity that surprises Tom and frightens Nia. Just as their lives appear to meld, the relationship – and their very lives – are put in jeopardy when Tom’s past unwittingly pulls them into a Russian plot to hunt down and assassinate Kremlin opponents. A Russian hit squad has begun operating in the UK and Tom and Nia find themselves fighting for survival, pitted against a ruthless Russian colonel hell-bent on revenge.