Fires That Forge by R.J. Hanson 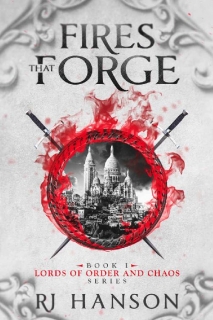 Murder. Lies. Betrayal. Magic? Can one inquisitor’s quest for the truth in a city bound for chaos save its soul? A serial killer roams the shining streets and dark alleys of the great trade city. How can you count yourself safe against a murderer that may wield magic as a weapon? As the body count rises, those in power demand someone pay for the heinous crimes. What if the one that stands accused is innocent? Is there still such a thing as innocence in Moras?

When he learns that his life-long friend is the sole suspect, the decorated veteran turned King’s Inquisitor takes it upon himself to save his friend and root out the murderer. Already struggling to keep the doors open to his hospital for those the city has forgotten, the young physician must now also find a way to prove his innocence and dodge the hangman’s noose.
Can the Inquisitor find the elusive killer before the executioner calls?