Fire in the Barley by Roger Longrigg, Frank Parrish 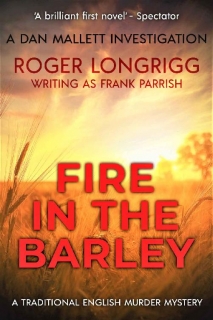 The best person to catch a criminal is a criminal himself…
1977, West Country of England
Reclusive poacher Dan Mallett spends his evenings prowling the local countryside for his latest catch.
And one night he is almost caught by the police.
But they weren’t looking for him – someone else has been committing crimes in the local area.
With his night-time hobby at imminent risk, Dan decides to try and catch the offender himself.

He uses methods that are by turn ingenious, crooked, and sensationally successful, but as he gets closer to solving the mystery, it seems the police could be about to pin the crimes on him…
Will Dan catch the perpetrator before the police catch up with him…?