Fire and Vengeance by Robert McCaw 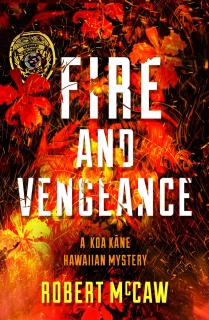 A heinous conspiracy—a volcano exacting revenge—an island paradise in anguish Having killed his father’s nemesis and gotten away with it, Hilo, Hawaii?

Chief Detective Koa Kane, is not your ordinary cop. Estranged from his younger brother, who has been convicted of multiple crimes, he is not from a typical law enforcement family. Yet, Koa’s secret demons fuel his unwavering drive to pursue justice. Never has Koa’s motivation been greater than when he learns that an elementary school was placed atop a volcanic vent, which has now exploded. The subsequent murders of the school’s contractor and architect only add urgency to his search for the truth. As Koa’s investigation heats up, his brother collapses in jail from a previously undiagnosed brain tumor. Using his connections, Koa devises a risky plan to win his brother’s freedom. As Koa gradually unravels the obscure connections between multiple suspects, he uncovers a 40 year-old conspiracy.

When he is about to apprehend the perpetrators, his investigation suddenly becomes entwined with his brother’s future, forcing Koa to choose between justice for the victims and his brother’s freedom.