Fate Not Chosen by Tara Lytle 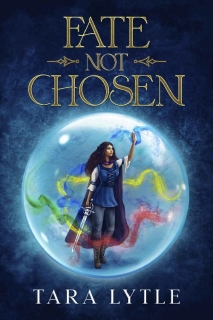 Marked by the Gods, Isabelle must fight for her survival. Being the most powerful mage alive helps but will it be enough?
Seventeen-year-old Isabelle Mirran is on the run from kidnappers. Her sunburst birthmark on her left hand, known as the Mark of the Gods, is causing trouble again. People always think she’s special because of it and no amount of arguing ceases them from believing the Gods have plans for her.

Now she’s caught the attention of an elusive mastermind who will stop at nothing to acquire her. Hard-pressed to protect herself, help arrives in the form of Crown Prince Andrew. Enamored, he guides her to a school for nobles and she’s enrolled for her safety.

There, she learns she possesses not one, but all four colors of elemental magic; marking her as the most powerful mage alive. Floundering to control her powers, she is overtaken by the mastermind. Forced to work for him, Isabelle becomes a thief and robs from the royal treasury. Captured by royal guards, she is judged and sentenced to be executed. With an arrow zooming toward her heart she has only seconds to live. She comes to the realization that having power doesn’t always save you.