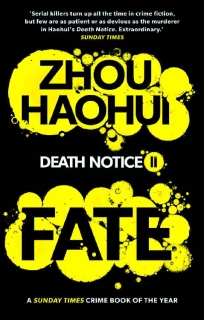 THE LAW IS WEAK
Last week, the vigilante killer who terrified and thrilled the city of Chengdu with his ‘death notices’ performed his own execution to escape capture by the police.

I OFFER REAL JUSTICE
But when two students are violently murdered, the only clue left by the killer is a death notice. The executioner? Eumenides. Now Captain Pei Tao and his task force face a terrifying prospect: that Eumenides left a protégé to carry on his work.

NOW MEET YOUR FATE
Once again, Eumenides is one step ahead of their investigation – but this time, it’s worse. Because this time, someone on the inside is helping him. Can Pei and his team root out the mole, and hunt down their new opponent? Or are they doomed to watch history repeat itself?