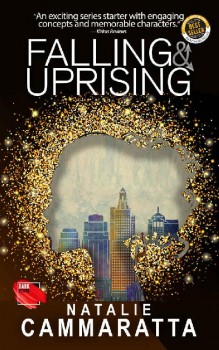 My star is rising, and I shine. Always.
Serenity Ward is the golden girl of Kaycie. She never questioned her city’s status as the last dry land on earth. The Establishment takes care of its citizens…or so she thought. But now she’s seen the map!
Why would they lie about other islands just beyond the horizon? In a city built on falsehood, figuring out who to trust is its own challenge, but Serenity pulls together a feisty group who all want the same thing—an end to the government which has hidden a world from them.

Bram’s anger drives his own desire for revolution. Being from another island, he was selected to be a brainwashed marshal in service to Kaycie, but he knows what’s going on all too well. Hidden in plain sight, he is ready to draw blood to free the islands. Only dealing with Serenity is the one thing he wasn’t prepared for.
Can two people who were never supposed to meet stop fighting each other long enough to remember who the enemy is?