Fall of Titan by H.G. Ahedi 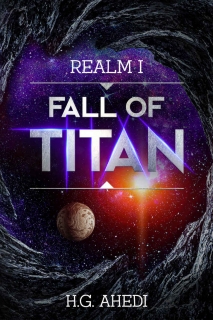 In the twenty-fourth century, a sophisticated security system called the perimeter guards the outer rim of the solar system. Governed by Titan, a powerful space station, the perimeter is almost impenetrable.

Emmeline Augury, an astrophysics cadet on Titan, believes in a family folklore about a mythical device with unlimited power. Recognizing its scientific and military value, she uses unorthodox methods to follow a trail of cleverly concealed clues.
Her search uncovers an ancient plaque, which reveals a star map of a secret network of portals leading to the device, the key that opens the doors to the seven realms. Suddenly, the key to absolute power is in her grasp, and everyone wants a piece of it, especially the power-hungry Orias queen.

What began as a scientific adventure turns into a dangerous manhunt when an Orias fleet attacks Titan. The queen threatens to slaughter everyone unless she is given the device. When the fate of Titan and the seven realms hangs in the balance, Emmeline must make a choice. Will she save her home or the device?