Fall from Grace by John Carson 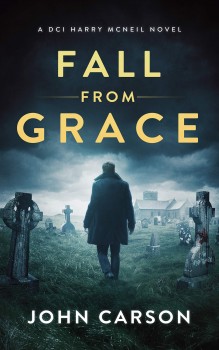 A mythical man known as Nightmare, haunted young children for years. Until he became real. DCI Harry McNeil knows the legend all too well. Growing up in the Highlands, Nightmare was on his and every other child’s mind as they went to sleep. Then, Nightmare claimed his first victim. A young girl, found dead in an abandoned cemetery with the words, I am Nightmare, carved into her chest.

Two more victims, the same words carved into them. Then Nightmare disappears. Now, years later, there have been reports of graffiti being sprayed around Inverness and on graves in old cemeteries. Is Nightmare back? The question is on the lips of residents who are starting to feel uneasy. Initially dismissed as a prank, things start to get all too real. A Glasgow couple are talking to their adult daughter on Zoom. She is a reporter for an online magazine and is in the Highlands reporting on Nightmare. She is being chased through the woods.

The couple don’t know if their daughter is spooked or if somebody is really chasing her. The call is cut and they call the police. The next morning, her body is found in a cemetery. I am Nightmare is carved into her chest. Harry McNeil is sent to the Highlands with a team from Glasgow. Their job is to hunt down a killer who once only existed in fevered minds. Once again, he’s all too real. I am Nightmare. Catch me if you can…