Eyes of the Forest by April Henry 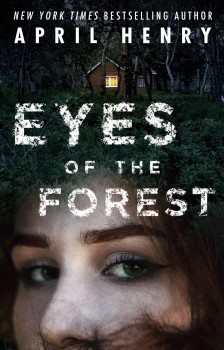 After a bestselling fantasy author disappears, only his biggest fan believes he’s in danger and has the courage to uncover the truth in this fast-paced mystery with a chilling psychological twist.

Bridget is RM Haldon’s biggest fan. His epic fantasy series, Swords and Shadows, created a lifeline between Bridget and her mom as she lost her battle with cancer. When Bridget met Haldon at his only book signing, she impressed the author with her encyclopedic knowledge of the fantasy world he’d created. Bridget has been working for him ever since as he attempts to write his final book. Now, Haldon is missing, and Bridget is the only person who seems concerned. Can Bridget piece together Haldon’s clues and save him before it’s too late?