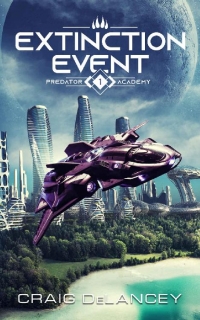 In a Galaxy at war, one human will join the fight.
Lincoln Finn is having a bad day. He just got kicked out of college, and all his plans to travel the world are dashed. It seems all his dreams are dying.
But then a spaceship lands in his yard.
Lincoln has been accepted into the Harmonizer Academy, where aliens from across the Galaxy train to become the most elite warriors of a star-spanning Alliance. War has begun, and the survival of Earth depends upon whether the Harmonizers can win their battles.

But first, Lincoln must survive the training. With his “pack”—a group of seven aliens—he is given a daunting first task: to save a primitive species from extinction when their planet is targeted with an asteroid bombardment. But all is not as it seems, and the rag-tag team of candidates must alone confront new enemies of the Alliance. The future of the Alliance, and the survival of all life on Earth, depends upon their success.