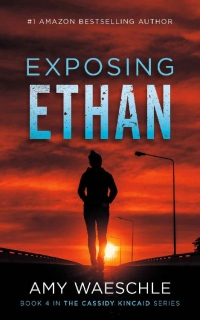 A ruthless killer. A hidden plot. Will Cassidy dig up old secrets in time to save the one thing that matters?
After a surprise discovery regarding her fiancé’s recent death, geologist Dr. Cassidy Kincaid is recruited by FBI special agent and old friend Bruce Keolani to help solve a connected case. But to her horror, they’ve also enlisted her beloved brother, Quinn.

In exchange for their cooperation, the FBI promises a favor too tempting to resist. However, deadly events have already been set in motion that put Cassidy and her brother in the crosshairs of a merciless killer following their every move. And when Cassidy’s friendship with Bruce shifts in a perilous new direction, her conflicting emotions undermines her fragile confidence.

As Cassidy and Quinn veer ever closer to the threat, clues connecting her recent rescue of a reckless college student brings old secrets to light, placing everything Cassidy thought she knew about her past and the mystery behind her fiancé’s death into question.
And when the person she most cares about vanishes without a trace, will Cassidy be able to sift the lies from the truth in time to save him?