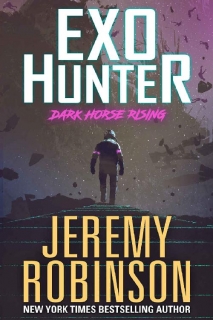 THE YEAR IS 1989
Callsign: Dark Horse and his Marine Rapid Reaction Force team have been sent to recover a strange artifact near Antarctica’s Soviet-controlled Vostok Station. Confronted by a team of Ruskie Spetsnaz, a battle for control of the strange device, frozen in the ice, breaks out. But before anyone can claim victory, or the prize, an explosion of white light knocks the combatants unconscious and whisks them away to…
2989.

One thousand years later. Dark Horse, along with his teammate, Chuy, and one of the Soviets, Drago, finds himself in a future that is both impressive and horrifying. Humanity has left Earth behind and is rapidly expanding throughout the galaxy under the banner of The Union, a white supremacist government who racially ‘purified’ the human race hundreds of years in the past.

Living on the fringe of this twisted Fourth Reich society, Dark Horse–the only black man in the Union–commandeers a vessel and scours the galaxy for his missing teammates under the guise of an Exo-Hunter, seeking out exo-planets to satiate the Union’s need for colonization. His search takes him beyond the edge of the known universe and into an interplanetary war, guided by a vast intelligence that’s been waiting for Dark Horse’s arrival–for a thousand years.