Everybody Lies by Emily Cavanagh 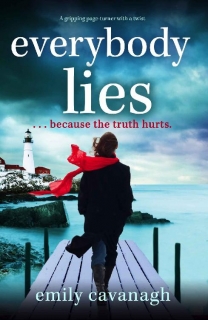 Daisy has lived on the island of Great Rock all her life. To the summer holiday makers, who flock to its golden beaches, it is a paradise. But Daisy can’t wait to get out.

She’s watched her mother get stuck here and knows that’s not the life she wants. She’s also ended things with Connor, her on-and-off boyfriend. A clean break seems best. Daisy has been working towards a place at college in Boston and all her dreams seem within her grasp. But when the body of a young woman is found on the snow-covered beach, it not only sends shockwaves through the tight-knit island community but threatens to destroy the lives of everyone Daisy loves.

Connor seems on edge: he knows more than he’s saying about who the woman was and why she was on the island off-season. Then the police arrest a member of Daisy’s own family. She knows there is no way they could be capable of murder. But who will believe her? Daisy was ready to leave the island behind for good, but the ties that bind her there are stronger than she realized. To have the future she wants, she will need to discover the truth about what is really happening on Great Rock and what those closest to her have been keeping secret…

A dark and atmospheric page-turner with a twist you won’t see coming. Perfect for fans of The Silent Daughter, Liane Moriarty and Sally Hepworth.