Everybody Knows by Karen Dodd 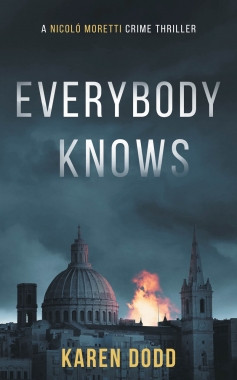 A shocking murder. Globe-spanning greed. Can he untangle the brutal truth while escaping a gruesome demise?

Calabria, Italy, 2019. Special Prosecutor Nicoló Moretti is reeling from the news he has a five-year-old son. And when he realizes his former lover is only coming clean because her high-profile anti-corruption campaign has provoked death threats, emotions flare and he never learns where she’s hidden him. Nico is overwhelmed with guilt when she’s slain in a horrific blast, vowing to hunt down the killers… and find his little boy.

Traveling to Malta to track down who ordered the hit, Nico battles ruthless power-mongers desperate to keep their secrets buried. And as he closes in on unscrupulous CEOs, government officials, and foreign despots laundering their dirty money, the callous assassination of a whistleblower has the determined investigator fearing he’s next on the list. Can Nico stay alive long enough to serve justice and save his?