Escaping You by Theo Baxter 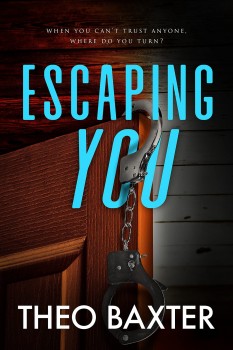 When you can’t trust anyone, where do you turn? Thriller novelist Amelia Case specializes in police procedurals. But ever since her cop husband Robert had an affair with his partner, she’s not only hit a wall with her writing but also in their relationship.

Her ultimatum to him meant a return to Boston, but even there, their relationship is on the rocks. And Robert is spiraling on the brink of alcoholism while working as a private investigator. When a break-in requires Amelia to contact the local police, David Burnett arrives and immediately takes interest in the lonely woman. And she can’t help but notice him, too. Quickly befriending them, David makes Robert a promise to help him get back on the police force while secretly setting his sights on Amelia and driving a wedge between the couple. With their marriage at a breaking point and distrust already strong between them, by the time Amelia and Robert suspect something may be amiss, it might already be too late. Where can you turn for help when you can’t go to the police? Amelia and Robert are about to find out.