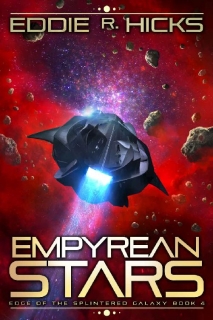 Omega Centauri. The edge of the galaxy. The farthest any human has ever traveled from Earth.
Captain Foster and her crew found a shortcut to get there. And like all things they’ve encountered across the Milky Way, it’s paved with dangers like the Draconian invaders and their fleets of organic ships.
New worlds, alien empires, and ancient secrets await the crew, and at least half of those are hostile.

But the worst threat they face is not the hostile alien fleets, the deadly radiation belts, or the mysteries of Omega Centauri and its uncountable number of star systems.

It’s the Imperial infiltrator lurking in the Johannes Kepler’s cargo hold. Waiting for the order to make Captain Foster and her crew have an unfortunate accident.
Before the crew explores the unknown planets in search of the Draconian homeworld, they need to find the threat from the known worlds they brought with them. Before it finds them.