Emergents Academy by K. A. Riley 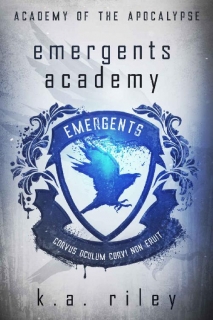 It’s been more than five years since Kress and her Conspiracy defeated Krug and his Patriot Army, traveled through Europe and back, completed a cross-country rescue mission, and made it home alive.
Things were looking up for the future of the nation…until the members of the Cult of the Devoted and the teenagers of the Army of the Unsettled decided to light the fuse for an all-out civil war.

Now, a special Academy—hidden high in the mountains and designed as a school to train young Emergents in the use of their abilities—is being forced into the fight. On the brink of a new global apocalypse, the mysterious raven-whisperer Branwynne and the techno-genetically enhanced teenagers of the Emergents Academy find themselves entangled in a three-way battle for power, where survival is doubtful, peace is impossible, and death is inevitable.