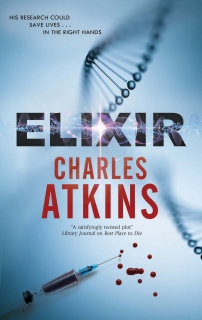 Dr Frank Garfield has found a cure for cancer, but cut-throat businesses are looking to profit on the research and don’t care who they trample over to do so.

Paediatric oncologist Dr Frank Garfield has discovered a genetic cure for cancer that can save his young patients. But his mentor, Nobel Prize laureate Dr Jackson Atlas, believes his research is like blood in the water for profit-hungry drug companies that will twist and weaponize it.

UNICO Pharmaceuticals CEO Leona Lang is desperate to find a new product, and Frank’s formula could be the answer. But Jackson is an obstacle.

Dalton Lang, Leona’s sociopathic son, has been tasked with seducing Frank into joining UNICO. His first steps are to eliminate Jackson and make it look like a burglary.

With Jackson gone, will Frank be persuaded to join UNICO or let his research, which could blow apart the cancer industry, die? The lives of innocent children hang in the balance. Frank can save them . . . but at what cost?