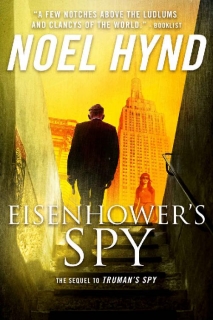 It is the summer of 1958. President Dwight D. Eisenhower personally enlists F.B.I. Special Agent Thomas Buchanan (the central character of Hynd’s ‘Truman’s Spy’) for a top secret assignment independent of the FBI and CIA. The President asks Buchanan to oversee the investigation of a perplexing murder in broad daylight in Manhattan. The best detectives in New York City cannot pull the case together. Or maybe they don’t want to.

Was the homicide a random slaying, a gangland ‘hit,’ a drug deal gone wrong or a political assassination? And the further question: why is this homicide, which might otherwise be a state or city investigation, the focus of such close White House attention?

Within days of starting his investigation, Buchanan finds himself, his life, his career and the woman he loves in jeopardy. He navigates a lethal web of Russian spies, local hoodlums, political provocateurs from the left and the right, the CIA, rival agents in the FBI, surly New York cops and Caribbean revolutionaries. The case is a nightmare, as are its ramifications. Equally perilous are the gritty gang-controlled urban streets where Buchanan must go to seek answers.

Buchanan soon finds himself working with an unpredictable New York City police lieutenant named Paul Maguire. A beautiful but suspicious young woman named Laura Brookfield filters in and out of the case. Day to day, Laura either aids them or sabotages them. And yet, she may be the key to Buchanan’s investigation.
The story twists and turns from New York to Washington to Havana and back again. The case comes in and out of focus like a mirage on a broiling summer afternoon. Buchanan moves from the drug dens of upper Manhattan to the mob nightclubs of midtown to the edgy coffee houses of Greenwich Village. He visits the hot jazz joints of the West Fifties and the corrupt police precincts of the pre-Serpico era.
Questions are many. Answers are few. Buchanan must make his own good luck. Meanwhile, the President is waiting for a report.
To some, America of the 1950’s was a bright, optimistic and prosperous place. But in ‘Eisenhower’s Spy’ a deeper reality smolders beneath the surface. The decade had begun with two wars: a bloody conflict in Korea that stalemated in 1953 and a global cold war that would intensify through the decade.
Berlin, Budapest and Taiwan were flashpoints of conflict and potential sparks for another world war. Americans passed the decade in fear of Soviet subversion from within or a sudden Soviet nuclear attack from afar. Worse, revolutionary ferment was as close as ninety miles south of Florida as Fidel Castro’s revolutionary army crept increasingly closer to mobbed-up Havana.