Dying Inside by Damien Boyd 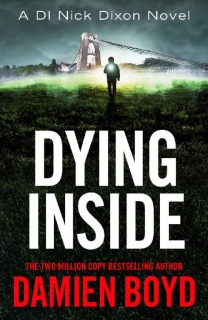 Newly promoted DCI Nick Dixon is stuck behind a desk when the peace of the Somerset countryside is shattered by a spate of sheep killings. Dixon recognises a sinister pattern: the animals have all been slaughtered with a crossbow, the power increasing with each kill. It seems whoever is responsible is practising, but for what?

Then the owner of a yacht that capsized on a suspected drug run is found dead, pinned to a tree by four crossbow bolts. Convinced that the killing is a gangland execution, the organised crime unit take over the investigation.

Dixon is sure the motive lies elsewhere, but is forced to watch from the sidelines—until another body is found.
Leading a major investigation team at Avon and Somerset Police headquarters, and with internal politics threatening to thwart him at every turn, Dixon must find the murderer before he kills again. And again…