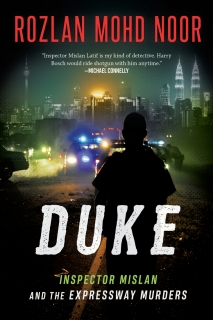 In the run‑up to the Eid holiday, the police department is drained of staff and the DUKE expressway jammed with vehicles, as many in Kuala Lumpur leave the capital to celebrate the end of Ramadan with their extended families. In the slow lane, a Mercedes E200 suddenly veers after several bright flashes and comes to rest against the guardrail. When the highway patrol arrives, what looked like a traffic accident turns out to be an apparent murder‑suicide of the driver and his female passenger, both having suffered gunshot wounds.

Yet, called to lend a hand with the investigation, Inspector Mislan finds something else again. The dead man and woman, a wealthy, politically connected entrepreneur and his business associate, were by all appearances engaged in a long-term affair, seemingly in love, and the crime scene doesn’t add up for suicide. But then, if these two successful people were murdered, why? And how, when the car was locked from the inside? And why does the political establishment want the case closed in such an awful hurry? Once again, Mislan must find a way—with the help of his team and his politically savvy boss—to withstand the pressure from above, solve an impossible mystery, and ensure that justice prevails.