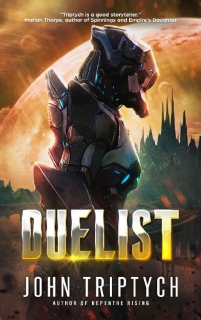 Interstellar war has been outlawed, and all conflicts are now determined by single combat. The fate of entire planets rests upon the actions of a duelist—specialized gladiators trained and modified with the latest technology to win a death match against their equally formidable rivals.

Dyron Dyrge is an upstart who rises in power and prestige with each victory. Yet he shuns the limelight, for his secrets would tear the galaxy apart if they were ever revealed. Alix, an orphaned concubine with mysteries of her own, also begins her ascent within a corrupt, class-based society that rewards only the most cunning and ruthless of them all.

Together, these two individuals will eventually determine the fate of known space… unless their enemies kills them first.