Dreamers Do Lie by Megan Cutler 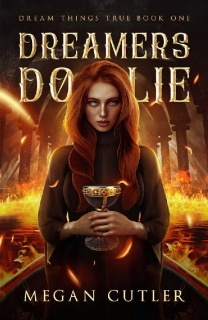 Arimand has just arrived in the outermost circle of Hell. A soldier of the eastern armies, he was damned for following orders. Now he competes with the rest of Hell’s denizens for the resources to ease starvation, dehydration and exposure. He quickly realizes there is safety in numbers and secures himself a position with a clan called Vorilia. Every damned clan covets something, but Vorilia may possess Hell’s most extraordinary secret.

Kaylie is a soul too pure for Hell. Though she can’t recall her life, she insists she damned herself somehow. Arimand not only disagrees, he spurs a mad expedition to set her soul free. Mad, because Hell’s only exit lies in its inner circles. To reach it, the clan will have to sail a burning river, avoid an army of demons and cross an impassible wall.

Worse, a demon stalks their every step. He calls himself Moril, and he was sent by the King of Hell himself.