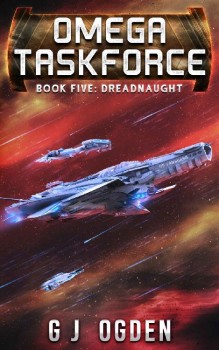 Space is cold. But the heart of an Omega Captain is colder still
With all hopes of developing a defense against the Sa’Nerran neural weapon gone, Captain Lucas Sterling and the beleaguered crew of the Invictus execute a desperate contingency plan. The warmongering aliens stand ready to attack and destroy earth – Sterling intends to give them a taste of their own medicine. An eye for an eye. A planet for a planet.
Powering through the Void in search of a powerful Dreadnaught-class warship thought lost two years earlier, Sterling intends to re-capture the four-kilometer-long vessel and use it to attack the Sa’Nerran homeworld itself.
Unfortunately, a Sa’Nerran ship packed with warriors is hot on their heels. In order to secure the mighty dreadnaught and prevent it from falling into enemy hands, Sterling must again take his ship and crew into battle.

But there aren’t many of them left.
Outnumbered, Sterling must rely on the Obsidian Soldiers – neurotic AI combat robots – for support. But he still doesn’t know if the machines can be trusted.
At the eleventh hour, an unexpected ally comes to Sterling’s aid. But will it be enough to defeat the Sa’Nerran and secure the Fleet Dreadnaught? As always, Sterling will be called upon to make hard decisions. Decisions that will cost lives.
The Dreadnaught is now their only hope of mounting a fightback. Without it the war – and the Omega Taskforce – is doomed.