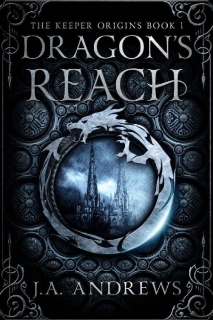 Before Queensland dominated the continent of Tallus, before anyone called themselves a Keeper, no one looked beyond their own small corner of the world.

But Sable, a reluctant thief with the power to sense the truth, would do anything to escape hers. Trapped in the slums, she’s spent years trying to pay off the debt she and her sister owe a vicious gang boss.
She finally slips out of his clutches, traveling with on odd set of companions:
a dwarf with a reluctance to go back home,
a man with miniature, mysterious, glowing tree,
a kobold with a tendency to over-help,
a playwright with a knack for getting stories out of people, and
two people with magical powers suspiciously similar to the monstrous, mythical baledin.

As Sable travels with them, she finds a taste of the freedom she’s always wanted, and discovers that her power to sense the truth in people’s words may be more powerful than she ever imagined.
But her freedom is short lived. Out on the edges of civilization, they come face to face with violent raiders. Stepping out of the nightmares of Sable’s past, these warriors are more than they seem, and herald the coming of a devastating army.
To have any hope of fighting off this looming danger, Sable must to return to the city she fled, and along with her companions, attempt an impossible task—uniting the Merchant Guild, the Northern Lords, and the powerful Dragon Priory.
Can Sable convince the land of the coming threat? Or will the approaching invaders destroy everyone and everything she loves?