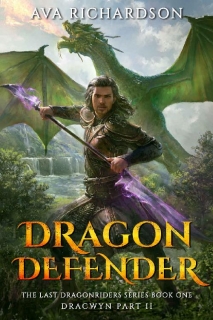 An ancient darkness awakens….
The Spirit King is dead but not forgotten, and young dragon rider Pieter’s wounds run deep. His dragon Gloriox is determined to help him heal, but when their travels bring them to the land of Chamenos, they find that trouble has gotten there first.

Gloriox’s niece has been captured, and every other dragon is gone.
With their newfound friends Ziggy and Rosa, Pieter and Gloriox will need to scour Chamenos in order to find Gloriox’s niece and face the tyrant king, who’s determined to find the first dragon’s bones and will show no mercy in achieving his goals. Yet, there’s more to the tyrant king’s dark magic than it seems, and Pieter may be the only one who can stop him.

Things won’t be so easy with dark spirits in the air and Pieter’s overwhelming fear of losing his companions to unnecessary violence. Some battles must be fought, though, no matter how much Pieter longs for safety. If he can’t overcome his fear of action, his hesitation could be just as deadly as any evil spell.
Danger lurks while ancient powers sleep, but if the powers awaken, Chamenos – and the world – will pay the price.