Down Among the Dead by Damien Boyd 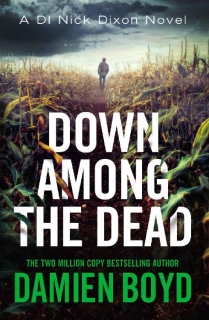 Somerset’s bloody past meets a dangerous present in this thriller from the bestselling DI Nick Dixon crime series.
When a badly decomposed body is discovered during an archaeological dig on the Sedgemoor battlefield, Avon and Somerset police are notified immediately. The remains are recent, and Detective Chief Inspector Peter Lewis knows exactly who they have found.

A single stab wound from a curved blade implicates convicted serial killer Daniel Parker, who Lewis arrested fifteen years ago.
With Parker’s appeal hearing imminent, Lewis comes under intense pressure to pin this new murder on him quickly and quietly. It’s an open and shut case—and Lewis should know—so why then does he insist on assigning it to DI Nick Dixon?

As Dixon starts to re-examine the original investigation, shocking revelations come in from the forensics team. And just as Dixon’s worst fears begin to surface, another body is found…