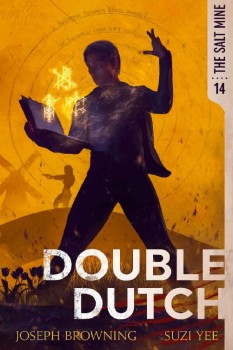 After the death of Graaf Hendrik van der Meer, Aaron Haddock—codename Stigma—is sent to retrieve enchanted writings from his library before it falls into the unwitting hands of the Nation of Luxembourg. Stigma’s routine mission takes a turn when he encounters agents of the Ivory Tower, the Russian counterpart to the Salt Mine, busy with their own mission.

When it becomes known that the late Graaf had more hidden away in his castle than either agency had anticipated, Leader gives Stigma free reign to adopt an old alias and track down leads on the continent while Chloe and Dot conduct unusual research from the sixth floor library.

As the stakes ramp up, Teresa Martinez—codename Lancer—is called in to assist and provide cover as Interpol. The pair embark on an esoteric scavenger hunt in the European Lowlands while the Ivory Tower scrambles to tie up their mission’s problematic loose ends. Only one side will come out ahead in this esoteric struggle and neither truly knows if the prize is a blessing or a curse?
When magic is real, someone has to rein it in.