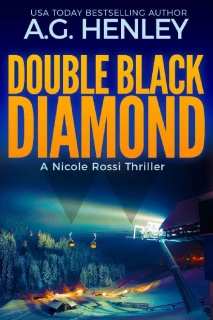 Most bodyguards are ex-military or ex-law enforcement. She’s ex-high school.
Nicole Rossi can take down gorilla-sized guys, find the nearest escape route in seconds, and identify three ways to use a ruler as a lethal weapon. Nic’s as highly trained as bodyguards come, but she has two big strikes against her: she’s young and inexperienced.
When someone threatens Veena Venkatesan, a rising star on the U.S.Olympic snowboarding team and the first Indian-American with a chance to medal in the Winter Games, Veena’s wealthy parents decide to hire a bodyguard to protect her. But Veena balks at having a middle-aged man follow her around her elite ski and snowboard academy. She wants someone who can blend with her friends—someone like Nic.

Nic can deal with the potential danger. What’s harder is earning the respect of her seasoned, all-male team, preventing Veena from breaking her neck in the halfpipe—oh, and passing chemistry. Then there’s the hot ski patroller whose snowboard lessons and secrets threaten to distract her from her job. One thing’s clear: Nic can’t let anything stand in the way of protecting Veena. If she fails, her own career and her client’s Olympic legacy—not to mention their lives—could be over before they start.