Don’t Look Back by Thomas Wood 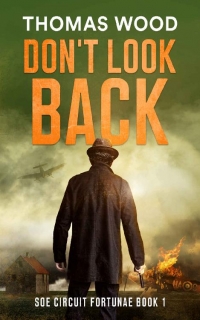 France, 1941: The most terrifying game of hide and seek is about to begin.
RAF fighter pilot, Johnny Parker, has barely any time to recover after huge personal tragedy, as he finds himself floating towards a quaint French village. Everything seems to be fine, apart from one thing; the village is crawling with Germans.

Tasked with establishing a secure and well run SOE Circuit, Parker must make contact with the French resistance, and channel their enthusiasm from recklessness to ruthlessness. However, the Germans aren’t the only ones he appears to be fighting. With nudges from his counterpart, Parker quickly finds himself suspicious of the very people that he has been sent to help.

Join Johnny Parker as he seeks to develop the flailing Circuit Fortunae, while avoiding close calls with the pursuing Germans, fighting internal divisions and, most of all, battling to keep his secrets hidden.
As the game unfolds, there is one question on Parker’s lips:
How will it all end?