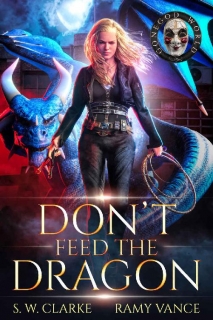 “They say revenge is best served cold…
Personally, I like mine served with a side of dragon fire.”
All I ever wanted was to be an acrobat in the circus. Then my family was killed by vampires and plans changed.
I became a vigilante, instead.

I still perform. My dragon, Percy, and I take to the skies in the greatest show you’ve ever seen. Our very own Cirque du Dragon …
Ever since the gods left, exiling their mythical creations to earth, things have been topsy turvy. And seeing this sassy Kansas girl cracking whips on the back of a dragon sure does draw in a crowd.
Not that I allow their adulations (and tips) to stop me from what I truly crave. Vengeance.
One of the murderous vampires is in New Orleans.
Seems he’s been up to horrible things since killing my parents: the illegal trading of mythical creatures.
And if I don’t stop him, no one will.
Lucky for me, I got two whips and a dragon by my side.