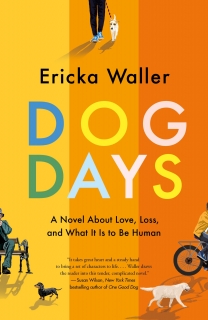 Ericka Waller’s Dog Days is a debut novel about the way dogs can bring out the best in us in the face of life’s challenges.

George is a grumpy, belligerent old man who has just lost his wife. She has left him notes around the home and a miniature dachshund puppy called Poppy. But George doesn’t want a dog, he wants to fight everyone who is trying to help him.

Dan has OCD but has channeled his energy into his career as a therapist. Afraid to acknowledge his true feelings, his most meaningful relationship so far is with his dog Fitz. That is, until Atticus walks into his life.

Lizzie is living in a women’s refuge with her son Lenny. Her body is covered in scars and she has shut herself off from the world. She distrusts dogs, but when she starts having to walk the refuge’s dog, Maud, things begin to change.

As three strangers’ lives unravel and intersect, they ultimately must accept what fate has in store for them with their dogs by their sides. Set against the backdrop of Brighton, Dog Days is an inspiring, unflinching, and deeply moving novel about life, and the way dogs can help us understand it, and each other, a little better.